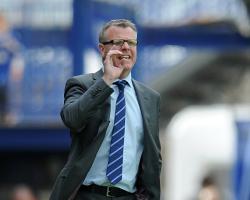 Portsmouth 2-1 Cambridge Utd: Match Report - view commentary, squad, and statistics of the game as it happened.U's lose to 10-man PompeyCambridge failed to take advantage of 10-man Portsmouth as Ryan Taylor's strike and an own-goal gave the home side a narrow 2-1 victory.In an enthralling game, Taylor gave Pompey the lead after 34 minutes when he headed in a pinpoint Miles Storey cross

And despite Adam Webster receiving his marching orders for two clumsy fouls on Harrison Dunk before half-time, Andy Awford's men soon doubled their advantage in calamitous fashion.The unlucky Liam Hughes attempted to clear a Ricky Holmes shot but saw his effort cannon off Tom Bonner past a stranded Chris Dunn, who was credited with the own goal, in the 66th minute.The newly promoted U's, managed by ex-Blue Richard Money, showed some fight to get one back through Crystal Palace loanee Kwesi Appiah, who headed a corner past Paul Jones minutes later.Appiah should have given the away side the lead after six minutes but shot aimlessly wide when clean through on goal.Storey then had a powerful drive crash off the crossbar for the hosts after 22 minutes before Ryan Donaldson hit the exact same spot on the woodwork for Cambridge after 56 minutes, but the home side held on for a valuable three points